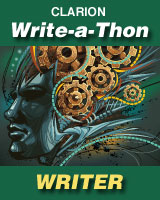 Has anyone noticed that I stopped posting my Clarion Write-a-Thon progress on Twitter, LJ and FaceBook? In case you did and were wondering, no, I have not stopped working on my Heirs of Mâvarin edit. I've worked on it every night, albeit for just a few minutes on the night I put together The Messenger for church.

But I stopped reporting my progress because I stopped making progress, in the sense of moving forward from chapter to chapter in my actual edit. Eventually I started over on it. I'm a little embarrassed about that.

The further I got with my attempt to break the novel's chapters into bite sized chunks, the less actual editing I did. I had decided to double back afterward and edit the new, shorter chapters, but I wasn't quite sure where it was that I stopped giving the actual words my full attention. At the same time, I was finding the 10 to 15 page chapter length I had attempted to be unworkable, given the lengths of some scenes and the rhythm of my storytelling.

So I started over, this time shooting for 25 page chapters, more or less. Are the same time I started rereading each chapter and making further edits for length, clarity and to reduce awkwardness in certain passages of dialogue. I'm up to Chapter Six, which was Chapter Nine, and before that Chapter Four. I'm on page 129 right now, but there's no way of knowing what other page numbers have been associated with Shela's revelation that Rani's coin is the one the mages gave King Jor before his kidnapping.

You may think it's silly, all this fussing with chapter lengths. If so, you're probably right. What's more important is, it gives me one last chance to see what can be cut and what can be tweaked, and to get rid of stuff that doesn't quite work, but survives edit after edit because it's so familiar that I don't read each word of it anymore and therefore don't notice. Not this time.

Today is Saturday. I've been working six day weeks for a while, and the seventh, Sunday, is just as busy with all my obligations at church and with two disabled friends. Last Saturday I didn't work, but I drove half an hour across town to renew the dogs' licenses, and later took Pepper in for grooming. Today I don't work, don't have any obligations outside the home. I've got housework to do, but that's it. This is my chance to read through the text with care and comprehension, and fix things that still don't quite work. And yes, I'll be working on chapter lengths at the same time.

No, really it's a good thing. I'm back on track, and I will get this done.

Lest we forget, this Clarion Write-a-Thon isn't just a chance to get me moving again on my fiction. It's also a fundraiser for the Clarion Workshop at UCSD, the current iteration of the sf writers' workshop where I first met John in 1977. Please help support their good work here. I will match each contribution up to $20 per person. Thanks!